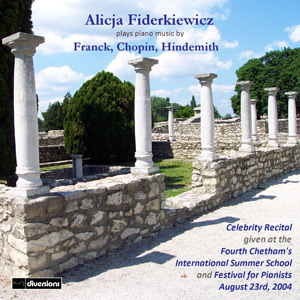 Piano Sonata No. 3 in B flat major

And finally, to an outstanding release…Alicja Fiderkiewicz … a pianist of rare quality… gives memorable accounts of this music. Personal but never idiosyncratic, direct but never prosaic, eloquent but never remotely sentimental, she plays with the kind of old-fashioned simplicity associated with the playing of her two great compatriots Mieczyslaw Horszowski and Artur Rubinstein (and is as well recorded here as ever they were).

Two Impromptus… are played with a sense of veiled mystery that is hard to define except by reference to her nationality, and even then not all Polish pianists achieve this mixture of passion and poetry. The Barcarolle… receives a lucid and enticing performance— (in the Hindemith) she does justice to a rarely-heard work which—is well worth exploration with so persuasive a guide.

... featuring Franck, Chopin, and Hindemith, sounds like a strange combina­tion. At times it takes a moment for one’s ears to adjust to the differing harmonic languages of each of these composers—but what a lovely recital from beginning to end when they do! The Franck has hardly ever sounded as original as it does in Fiderkiewicz’s hands; at times it seems almost as though she were making up the music on the spot, so supple is her phrasing, so improvisatory a character can she create. But what follows is equally enthralling: her Hindemith! Her playing here is filled with power, with drive, even sweep; in her hands Hindemith’s music sounds as new as the day it was written, almost like computer-music of the future!

There are some lovely moments in these pages. Her Chopin Impromptus, Nocturne and Barcarolle are well played and reinforce the critical assessment of her as an accomplished Chopin interpreter.