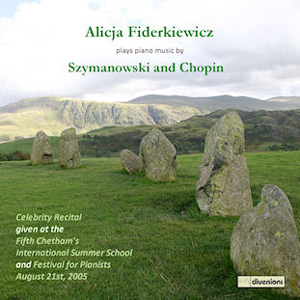 Alicja Fiderkiewicz’s recital dedicated to the memory of her sister, (celebrates) the musical glory of her native Poland.

She divides her programme between Chopin and Szymanowski …

Scrupulously sensitive to both the letter and the spirit of the scores, she plays four of Szymanowski’s early nine Preludes… Few pianists have sounded more personally attuned to their obsessive Slavonic melancholy and, turning to Masques, she takes the listener from such early Chopinesque musings to music as fraught and audacious as it is intricate and precise… Fiderkiewicz’s identification with the composer’s complex idiom is complete.

She is no less convincing in Chopin, and here her romantic freedom and sense of a less decadent or exotic fantasy illuminate every bar of the opus 55 Nocturnes. The C minor Polonaise and F minor Ballade, too, suggest a rare balance of sense and sensibility,

Dunelm Records have captured all of this pianist’s wide dynamic range, making this special recital very much a reminder and a remembrance.

Alicja Fiderkiewicz is an outstanding pianist who deserves to be much more widely known.

In full command of technique, she is able to project vivid interpretations especially in music of composers from her own country, Poland, as recorded on this CD. The performances were recorded ‘live’ at her celebrity recital given at the Fifth Chetham’s International Summer School and Festival for Pianists, by kind permission of the Director of Music. The recital had an added significance in being dedicated to Alicja’s sister, Elzbieta Fiderkiewicz-Mirska, who died of cancer in 2005. I feel that this gave impetus to the wonderful performances recorded here.

The Chopin here is outstanding; both Nocturnes are superbly poetic, the C Sharp Minor Polonaise, understated if anything, shows deep musicality and the F Minor Ballade is stunning.

Read both reviews in full here.

The pianist shows herself the true virtuoso in the final recital, featuring the music of Poland’s two most famous composers, Chopin and Szymanowski. She easily negotiates the numerous hurdles in this music, from the Impressionistic-sounding swirls of notes found in Szymanowski’s Masques to the final climactic coda in Chopin’s F-Minor Ballade, the latter reminiscent of Richter in its over­all power, its tonal charm, and in the employment of one of that pianist’s quirks: his holding of the low C-octave right through the fermata rest at the beginning of the coda.