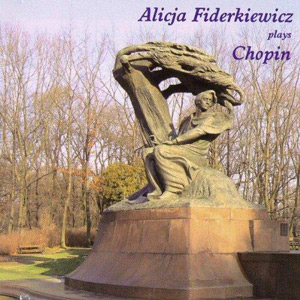 Polonaise-fantasie in A flat major, op. 61

Smart interpretations of Chopin going through dark and darker moods, this is a dignified and tuneful take on later works by Chopin when he was in his exile from Poland. The “Polonaise” played here is not his famous one and you get a feel for his sadness right thought the joyfulness of his dance pieces. The album is well played and up front in its simplicity being a nice find for the classical piano fancier.

The pianist Alicja Fiderkiewicz may have been born in Warsaw, and trained at the Central School of Music in Moscow, but it was at the Royal Northern College of Music in Manchester that she ended her studies, and even before then, in 1972, she had already made an impact on Manchester with her UK debut at the Free Trade Hall.

Since then she has made many appearances with the Hallé and Manchester Camerata, stopping off on her busy international career. Her new CD was recorded at Chetham's School of Music in February, and is a well-chosen programme of music by Chopin including seven Mazurkas, two Nocturnes and the Polonaise-Fantaisie. She is clearly on home ground here in this satisfying recital issued by Divine Art.

This finely played, acutely interpreted and attractively recorded recital reflects well on all concerned. Fiderkiewicz has, if one can put it this way, Chopinesque chops. She summons up the right sound, colours appositely, is constantly mindful of the rhythmic flux of the music and she vests things with apposite characterisation. In short she is a perceptive if sometimes wilful guide to the music and has constructed a balanced recital.

It's perverse of me, therefore, to start with a big niggle but let's get it out the way now, not least because it concerns the opening track, the C minor Nocturne. This is yet another of those overtly funereal performances that, despite the galvanising moments later on, never recover from an initial tempo that drags things down. Passionate, tensile and richly contoured though the middle section undoubtedly is it seems too much so in the context of both the opening tempo and mood. There's a definite feeling of rushing and a confused sense of the architecture.

The companion Nocturne immediately re-establishes her credentials in this repertoire. It's pensive, reflective, rising and cresting with melancholic conviction. Above all she conjures the shifting patterns and moods with real concentration. The Opp.24 and 59 Mazurkas herald a series of elegance, touch, refinement and control. None is quite as fast as Rubinstein's but they resolve their own momentum with consistent insights and a real sense of terpsichorean naturalness of rhythm.

The Third Ballade sounds closely allied to a watery Barcarolle in this persuasive performance. The glinting colour of the narrative is another decided plus – and unlike the opening Nocturne the narrative thread is more – though still occasionally idiosyncratically - anchored to pertinent paragraphs. The sole example of her way with the Preludes is richly voiced albeit the basic tempo is very slow.

Finally there's a really buoyant adrenalin-laced Polonaise-Fantasie in A flat major which finds all the moods, colours and textures as well as the dramatic frame of the thing. There's elegance here but passion too with some very personalised rubati. Minor finger slips are inconsequential when set against the vitality and characterful verve of the playing.

Fiderkiewicz proves her credentials with this recital. This is Chopin playing of often impulsive engagement; sometimes a little too much for some but still eloquent.

She has a tone of exquisite beauty and does not fall into the trap of being maudlin. There is an intensity in her playing of the major works which is not marred by emotionalism. Her style is admirable and generally in accord with Chopin.